PARIS, France (AFP) — New protests erupted in Iran on Sunday at universities and in the largely Kurdish northwest, keeping a seven-week anti-regime movement going, even in the face of a fierce crackdown.

The protests, triggered in mid-September by the death of Mahsa Amini after she was arrested for allegedly breaching strict dress rules for women, have evolved into the biggest challenge for the clerical leadership since the 1979 revolution.

Unlike demonstrations in November 2019, they have been nationwide, spread across social classes, universities, the streets and even schools, with no sign of letting up.

It was not immediately possible to verify the toll.

The latest protest was sparked by the death in Tehran of a Kurdish student from Marivan, Nasrin Ghadri, who according to Hengaw died on Saturday after being beaten over the head by police.

Iranian authorities have not yet commented on the cause of her death.

November 6 – Kermanshah, western #Iran
Locals in Ferdowsi St. continuing the nationwide protests against the regime on the 52nd night of the uprising.pic.twitter.com/D9afFjjz7v#IranProtests #IranRevolution#آزادی_آزادی_آزادی #مرگ_بر_ستمگر_چه_شاه_باشه_چه_رهبر

Hengaw said Ghadri was buried at dawn, without a funeral ceremony, on the insistence of the authorities who feared the event could become a protest flashpoint.

Images posted on social media showed protesters threw stones at the official administration building and took down and burned the Islamic republic’s flag. Residents, including women without headscarves, marched through the streets.

Authorities sent reinforcements to the area and the sound of gunfire echoed around the city as night fell, Hengaw added.

November 6 – Marivan, western #Iran
More footage of locals continuing the nationwide protests against the regime on the 52nd night of the uprising.#آزادی_آزادی_آزادی #IranProtests #IranRevolution#آزادی_آزادی_آزادی #مرگ_بر_ستمگر_چه_شاه_باشه_چه_رهبرpic.twitter.com/n9F3w6FS7W

Kurdish-populated regions have been the crucible of protests since the death of Amini, herself a Kurd from the town of Saqez in Kurdistan province.

Students at the university in Babol in northern Iran meanwhile removed gender segregation barriers that by law were erected in their cafeteria, it added.

The protests have been sustained by myriad different tactics, with observers noting a trend of young people tipping off clerics’ turbans in the streets.

IHR said Saturday that at least 186 people have been killed in the crackdown on the Mahsa Amini protests, up by 10 from Wednesday.

It said another 118 people had lost their lives in distinct protests since September 30 in Sistan-Baluchistan, a mainly Sunni Muslim province in the southeast, presenting a further major headache for the regime.

IHR said security forces killed at least 16 people using live rounds, when protests erupted after prayers on Friday in the town of Khash in Sistan-Baluchistan. 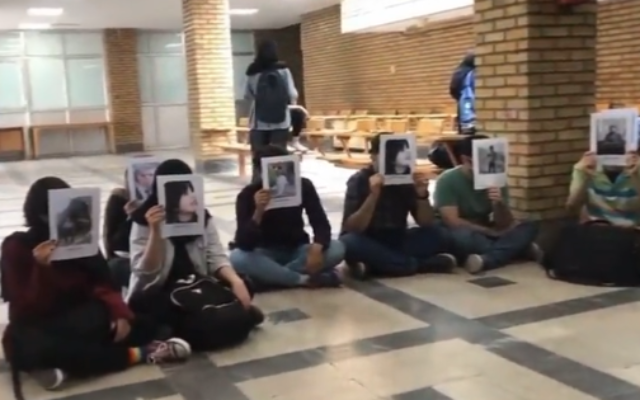 Iranian students hold a sit-in protest at Tehran University, October 23, 2022. (Screenshot/Twitter: used in accordance with Clause 27a of the Copyright Law)

The protests were fanned by fury over the restrictive dress rules for women, the reason for Amini’s arrest. But they have now become a broad movement against the theocracy that has ruled Iran since the fall of the shah.

Meanwhile, Sunnis in Sistan-Baluchistan — where the alleged rape of a girl in police custody was the spark for protests — have long felt discriminated against by the nation’s Shiite leadership.

IHR also warned that “dozens” of arrested protesters had been charged with purported crimes which could see them sentenced to death — up from only a handful earlier reported to be potentially facing that fate.

On Sunday, the vast majority of Iran’s lawmakers — 227 out of 290 — urged the judiciary to apply “an eye for an eye” retributive justice amid the protests, which authorities have labeled as “riots.”

The ongoing crackdown has seen the arrests of prominent activists, journalists, and artists such as rapper Toomaj Salehi.

Iranian rapper Toomaj Salehi has been arrested for being the voice of protesters. He is known for his courageous lyrics and his dissent on social media. People are very concerned about his safety #توماج_صالحی‌_را_آزاد_کنید #توماج_صالحی #Toomaj_Salehi #ToomajSalehi #FreeToomaj pic.twitter.com/IPIbFNoobw

There is also growing concern about the well-being of Wall Street Journal contributor and freedom of expression campaigner Hossein Ronaghi, who was arrested in September and whose family says is on hunger strike in Evin prison.

In a new blow, his father Ahmad is now in intensive care, after suffering a heart attack while conducting a vigil outside Evin, Hossein Ronaghi’s brother Hassan wrote on Twitter.

Prominent dissident Majid Tavakoli, also jailed at the start of the crackdown, was beaten in Evin, his family wrote on social media.